Finishing Day 1: What a day!

After leaving Charleville, where John and Breada Crowley live, we continued south to Bantry and the Clan Gathering. Liam continued with his Crowley history lesson along the way. We were exhausted, and apologized for nodding off now and again during the three-hour drive. He said he completely understood, and only talked when he knew we were conscious.

We passed the hill where early Crowleys held Mass in full view of enemies set on attack, as Catholic Mass was forbidden in public. He told us there was a cross erected long ago that fell into such disrepair over time, that the Clan replaced it. We didn't have time to go up there this trip though. Then, we passed Hurley Castle. Dan Crowley, our great, great grandfather, was married to Johannah Hurley. He said we were driving through Hurley lands. I cannot even express the feeling we had passing through Crowley lands in West Cork, Ireland. I felt like I was in a historic novel or movie. 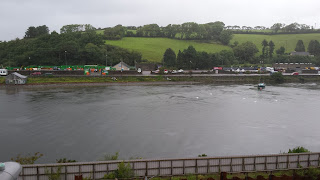 We also drove through Drimoleague. This is where I suspected from ancestry research that our great grandmother, Jennie Kingston Crowley was born. I mentioned this to Liam and he said this is where all the Kingstons are from. In fact, he said, that dairy farm right there is run by the Kingston family. They make small-batch yogurt, cheeses and milk. I was so tired, I didn't make note of the name.This was the final link. I could not find any firm documentation for our great grands or our great great grands, and Liam was confirming all my research was accurate. I felt so wonderful in that moment: so rooted in a culture I longed for all my life. I have an Italian, childhood best friend, and was always so jealous of her culture. She lived it every day. We did not. The void I felt grew larger, but here the void was filled to overflowing. I smiled in contentment. 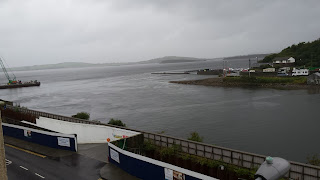 Once we reached The Maritime Hotel in Bantry, Liam unloaded all our heavy luggage and refused a tip. "This is family," he said. We kissed and hugged him, and said see you soon. He was one of the Clan Council in charge of the weekend. We got settled in our two-bedroom, family suite, and headed out for a pint and some supper. Bantry is a lovely village, full of shops, pubs and restaurants. We toasted to our trip, had a delicious meal, and turned in early for the night. It had already been a very full day, and we could not take in one more thing.

Posted by Kathy Crowley-Gardner at 5:43 AM