Our last Gathering day was spent driving to the Beara Penninsula. First, we visited the village of Allihies where the copper mines are located. We listened to a very interesting lecture about copper mining, and the torture of the Irish who worked the mines.

The squallor our ancestors were forced to endure boggle the mind. Families were drawn to mining because the famine forced it as an alternative to make money when the potatoes families depended on for food and income vanished in the blight. After seeing the depths of fathoms men were required to descend in order to reach the copper veins, I asked the lecturer, "How did those men deal with the pressure of those depths?" "They died", he said. We saw the castle built by the owner of the land where the mines were located, and it made me angry. The inequities of those who profit at the expense of workers who suffer was so blatant and so sad. 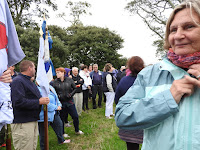 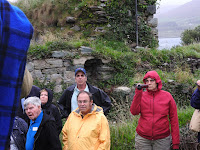 I actually confused the timeline of events in my last post. Our visit to Dunboy Castle was actually this day, after the mines. I remember because, after passing the incredible castle built on the backs of Irish miners, we approached the area to disembark for Dunboy Castle. We were delayed in getting off the buses because the fence that secured a drive for the buses to turn around was locked. There was Liam with wire cutters in hand, cutting the wires that held the gates closed until the men lifted the gates and layed them aside. The wire was replaced when we were about to depart the area. Our driver joked, "Who expects to go home this week?" We all raised our hands. "I'll be visiting you in an Irish prison for sure. Don't expect to be leaving!" We all laughed a little guardedly.

Also a not-so-funny event occured on the way to Crowley Castle. While we were at the castle, our small bus tried to back up down the road and ended up stuck in the mud of a ditch. We had to wait while Liam got hold of the local farmer whose land hosted the Castle to come pull it out with his lovely new blue backhoe. Billy had to be in the thick of helping with this, of course. After we got on our way, we were once more delayed as a car driving opposite our bus was stalled in the road. These roads are very narrow and passing vehicles is a challenge. Everybody yelled, "Billy, go help her!" So he did. He got the car started with gratitude from the woman driving it, and now he can declare, "I drove in Ireland!"

Once we reached the Beara Penninsula, Tom Crowley, a past Taoiseach, was in charge as this area of old Ireland is his ancestral home. He has cousins who still live here and buried in the cemetery we visited. He comes back here every year to visit family. 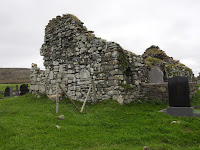 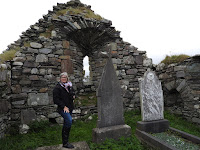 He introduced us to the history of the Kilkatherine cemetery. This was the site of a monastery. In turn, male monks inhabited it and also nuns posing as monks. Nuns were not allowed to live alone, so they posed as monks and served Mass. It was a beautiful old cemetery, and the monastery ruin's stonework was magnificent. 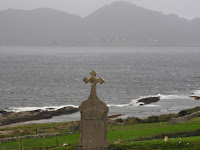 When we disembarked from the bus in this area, we were hit by very strong winds. It was not raining, but I had to be careful walking as in one moment walking around the old cemetery with long grass and hidden stones, the gust was so strong I felt myself sway with it. "Ground yourself," I said to myself. 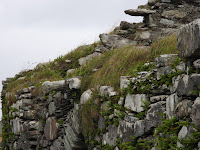 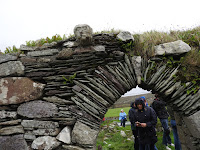 On one wall of the ruin facing the sea, a strange head is mounted. Tom told us this story: A man exploring the cemetery one day found the head in the grass. It had somehow been knocked off its place at the top of the wall near the entrance. He took the head home. For days, he heard strange crying in the night, like a cat screaming. This went on so long, that he finally realized it had started when he brought home the head. He took the head back to the cemetary, and with cement, mounted it in its place on the wall. The night screams were silenced ever after.

The entire weekend's weather was a miracle. We said to everyone who credited our happy dispositions with bringing the sunshine with us, "You're welcome!" When on the bus, it rained. When we got off, the rain stopped (for the most part). It was great. After taking many pictures, we headed back to the hotel for a final farewell at JJ's pub in Bantry.

Posted by Kathy Crowley-Gardner at 8:49 AM