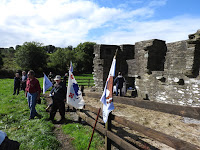 This was the most emotionally moving experience of my life, indeed of all our lives. The buses pulled up to yet another area of green fields with herds of white cows this time, while we all gathered on the dirt road. As we gathered, we waited for the new Chieftains, the Taoiseach and the piper to move to the head of our Clan. When the piper began to play we moved en masse as we marched as a Clan to the Castle. Something shifted inside as we realized we were now part of a Clan. 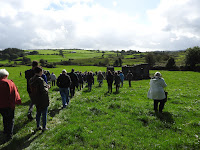 As we marched past the cows, we rounded a corner in the road where more green fields of every hue were layed out before us as far as the eye could see. Something wrenched in my heart again, and tears welled up. I started to choke on those tears and had to shut off my video camera because the emotions were just too strong to share. What was happening to me? I cried off and on all day!

As we trekked down the road another herd of black and white cows came running toward us at full gallop. We all laughed. One black and white calf headed the herd toward us, while a black calf intercepted it saying, "Oh no you don't!" The black and white calf said, "Screw you!" and turned in the direction we walk running for all it was worth to meet us at the tree line before we marched up hill. It stood there watching us and soon the rest of the herd galloped and caught up. We laughed so hard at these antics. These cows were hilarious! 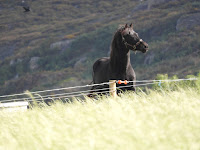 On the left was a lovely field, and in the center, was a fence in which the most beautiful black stallion pranced wildly. His head was as erect as is tail. His tail was so straight it looked like a flag. It was a stunning animal and many of us stopped to take pictures of his magnificence. 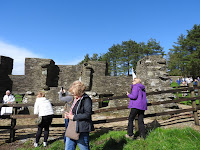 As we rounded the hill, the restored ruins of Crowley Castle shown before us. It was literally in the middle of nowhere, set like a black jewel in fields of every green imaginable as far as the eye could see. We made our way down to the castle that was surrounded by a fence to keep the cows out, and saw priests preparing an altar for the Catholic Mass we were about to participate in. The Council members mounted Crowley flags just awarded onto the fence, but not before a priest blessed them. Liam got down on both knees for the blessing after laying a handful of hay on the ground to try and keep his pants dry. It rained on us off and on during the Mass.

Larry Crowley played his banjo and someone else played guitar as a group sang hymns during Mass. We were all given sheets with the songs and their words to join in as we wished. As the rain baptized us in our new homeland, we all solemnly walked up to receive Communion while hymns were sung by the group. A little brown and white puppy and a black and white herding dog ran around us while children ran and played in front of the fence. It was such a special and intimate moment we will never forget.

After Mass, we made our way back to the buses for our last trek of this wonderful day.


Posted by Kathy Crowley-Gardner at 6:49 AM