We followed Jim a mile down the road to John and Breada Crowley's house. Liam joined Jim to talk with Breada, who had just arrived home from a much-needed walk. She said she had just put her Wellies away when we arrived. Liam asked us to stay in the coach to make sure all was well. Jim told her, "I have some Americans from Boston in the coach come to see ya." "You're kiddin' me!" she exclaimed. "Well, bring 'em in for tea then," she said, and we all piled out of the coach laughing. We dropped in unannounced, and she welcomed us with open arms.

We followed her into her lovely little kitchen, and Joe Crowley, John's brother, on dialysis she told us, said hello. We shook his hand in greeting and I noticed a beautiful large basket of green apples on the table next to him. He left as we were escorted into her sitting room. The rooms were small, but so homey. There was a china cabinet in one corner with at least six large tea pots all covered with hand-crocheted cozies. I asked Breada if she made them and she said, "Oh no! I'm no good at that stuff. I can bake and work an engine, but that's about it." 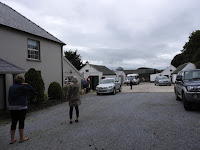 Soon, John joined us. When we saw him outside, he came up dressed in Wellies, a wool cap and coat and walked with a shillelagh. He looked the epitome of an Irish gentleman farmer. In fact, he and Breada live on and still work his grandfather's dairy farm. It is a beautiful place.

While Breada chose the tea pot she wanted to use, their telephone rang. It was their son, Sean, who lived next door. Next door was a few hundred yards away. "Come over right away, Sean. We have visitors from America here. From Boston!" "You're kiddin' me," he said. "No! Come right now!" she exclaimed. And he did. It became clear to us that Sean was very good to his parents.  Breada pulled a lovely maple, drop-leaf table into the middle of the room and set it with good china tea cups and serving pieces. She had just made a delicious apple tart. It was still warm. "If I knew you were coming," she said, "I'd have baked you a cake!" We all laughed. She served us tea and tart, while we chatted about who we are and where we live. We shared stories of our families and soon realized we really were related. 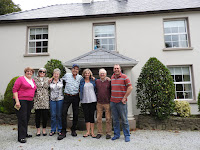 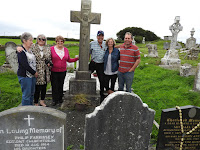 Our great great grandfather, Dan Crowley, was John's great grandfather's brother! They lived just down the road, and we drove there to see the house. They also told us where to find the house in which all our Crowley's were born. The clincher was that Billy took the Clan DNA 37-Marker test. We are two generations-removed from Michael Patrick Crowley, the Clan Taoiseach. He is related to John, so that makes us family too. Without the DNA test, we could not have confirmed our relatedness. It was a very exciting discovery indeed.

Breada showed us the house and introduced us to her family from the many pictures hanging on her living room wall. The hearth of their fireplace was a magnificent piece of art, and I wished I took a picture of it. It didn't seem right to do that. As it was, I asked permission to take a picture of Breada out of respect.

When we were ready to leave, Sean asked if we had been to see the Crowley plot in the cemetery. We told him we couldn't find it, so he and Breada hopped in the coach and took us back there. We realized it was the only non-Celtic cross in the cemetery!
We had taken pictures of it and didn't even notice the Crowley names all over it. We felt so at home with these loving people.

When we did leave, Breada stood at the top of their drive with tears in her eyes as we threw kisses. We hugged many times and kissed before leaving. We exchanged contact information, and I promised to send Christmas cards and letters every year. Now we have family to visit when we return to our homeland. It feels to good to be able to say that. Our homeland.
Posted by Kathy Crowley-Gardner at 5:19 AM