We all woke up a little hung over, so we took advantage of the full Irish breakfast. There was a lecture on the DNA test we participated in, so I wanted to attend at 9:00am. Because we woke up a little late, and I had to eat, I went to the hall, explained my plight, and showed up twenty minutes late. The lecture was more about the technicalities of the test, what the markers mean, and types of tests. A call was put out to convince more Crowleys to take the test. I agree. It was a good call for our family. If it weren't for taking the test, we would not have met our Irish relatives.

There were two large buses and one small bus waiting outside at 10:00am to take us all on our journey into our Crowley past. We began by stopping at a lovely farm that I was getting to see up close. Two years ago, my husband, Larry, and I took a tour of Ireland, Scotland, Northern England and Wales. One thing that struck us were all the ruins of stone houses deserted and left to decay from those who left the country or died during the famine in the mid-1840s. Seeing all those ruins hurt my heart. But then, in time, we noticed new houses built right next to them. There was a sense of "coming full circle", so I felt happier. This was one of those farms. We parked right next to a decaying stone house with caved-in roof covered in blooming vines. Next to it was a lovely, brightly painted farmhouse with a young mother and child walking up to the house after hanging laundry on the line to dry. It was truly an idyllic scene. 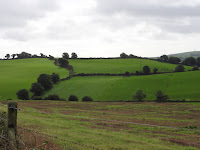 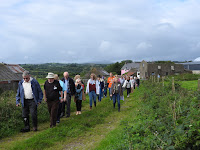 We all disembarked and began the trek up the muddy dirt road lined with green fields as far as the eye could see; the smell of cow patty and the sounds of mooing all around us. Lots of people complimented us on our Wellies, and we were very happy we bought them. It was a drizzly day off and on, and the ground was very wet and muddy. We walked about a quarter mile up the road until we came to a gate, and we were escorted across a field with a herd of cows turning to watch us. We all laughed over and over again at how curious cows are. They are one minute minding their own business, and when humans enter their world, they all turn to see who the intruders are and what they are up to. One woman said, "You'd think we never saw cows before!" We all took many, many pictures of them. They made us laugh. 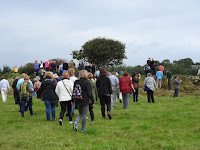 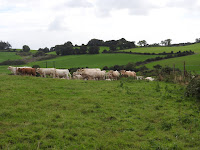 In the distance, a Clan Council member was putting the Crowley flag in the ground of a raised mound that formed a circle in the field. There were growing trees on the mound to give dimensional interest. We were instructed to climb up the top of the mound and fill the basin if desired. The basin of the mound was all long grass and stones. One had to be mindful of footing because hidden stones meant treachery to the ankles. 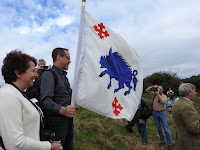 As we all waited, Michael Patrick, the Clan Taoiseach, began his talk by explaining the history of the Crowley Clan and how it was formed. What I remember most was that in the year 1012 AD, the Crowleys and McCarthys were essentially like the Hatfields and McCoys; warring Clans. They battled for the field in which we stood, and the Crowleys won. Hence, this spot was where the Clan was born and built its first round tower fort called Cahir O'Crowley (stone fort). Later the two Clans became allies and fought against the O'Leary's. 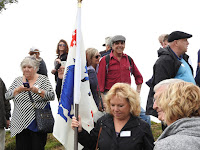 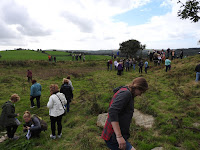 There was a large stone on the ground across the circle from where I stood, and he explained this was the entry stone to the tower. It had a small drawer-bridge door over the moat that surrounded the tower. We all took pictures standing on the stone. After his talk, Michael Patrick encouraged us to walk around and think about the Clans early beginnings and what it must have been like for them. 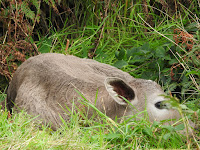 As we walked around, snapping pictures, I realized a young woman, Hailey, was warning everyone who came near to be careful not to come close to a young calf laying almost invisibly near a shrub. She said it is already very stressed from being separated from the herd, so please don't come too near or touch it. I thought she worked for the Council, but no, she was just a concerned college student attending the Gathering with her mother and aunt. She was a very sweet young woman, who became very helpful to me. She put out a hand when I was climbing down tricky terrain more than once during the day. I felt a little old, but welcomed the assistance. I just accepted that I needed it and moved on instead of my usual admonishing myself for not being slimmer or more fit. My knees don't work like they used to and that's just the way of it now. She was attending college in Utah.


We all made our way back to the bus and began the ride onto the next historic site.

Posted by Kathy Crowley-Gardner at 5:40 AM