Liam got us settled in the small coach bus and, after consulting his paper map book, we were off to breakfast in Adare. Liam was talkative, charming, funny, and very knowledgeable about his country, tourist highlights, history and politics. He impressed us as a man who is proud of his country. A true patriot. He is also on the Crowley Clan Council. His father was one of the original new Clan Council members who re-birthed the Clan in 1970 until he died. Liam took his place.

He walked us to a bank in Adare so I could try my debit card again. It failed once more. It became clear that I needed to talk to a bank person. So, after taking pictures in front of thatched cottages, we ate at a charming cafe, The Good Cafe. Billy took Liam`s lead and got a full Irish breakfast with eggs, sausage, bacon, black and white pudding, a grilled tomato and a slice of really good bread. We needed coffee really badly too. Jeanne was thrilled with her porridge made with almonds and fruit. She mixed peppermint and chamomile teas which were served in a cute little pot. I learned Barry's Tea is what everyone drinks. Breakfast was perfect all around.

Next we headed to Dromina where I thought our paternal great great grandparents may have shopped. It looked like a good size village on the map. It was really just a little strip of businesses, including a general store/post office. Our destination was Kilabraher North where I believe they lived. I only have a 1901 census as reference, and wanted to see what was still there. 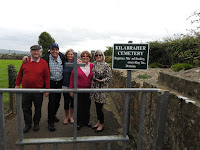 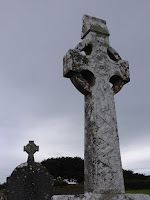 Liam went into the store and asked if anybody knew where the Crowleys lived in the area. Noreen O`Connell spoke up and said her Da knew everything about the area. She rang him up and he said he`d be there in two minutes. He was! Jim O`Connell was a very sweet and generous man. After some introductions, thank yous, and clarity about where it was we wanted to go, Jim said, "Follow me." So, we hopped in the coach and soon we were at the Kilabrahar Cemetary. The cemetary is located amongst green fields of every hue, separated by hedge rows which made the landscape resemble a lovely quilt. The scent of cow pie permeated the air because herds of dairy cows were everywhere. 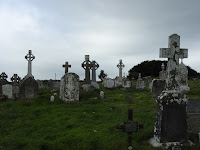 We never found our ancestors, but so enjoyed this lovely, very old cemetery. Soon, Liam called to us that Jim was going to take us down the road to John Crowley's house. So we hopped in the coach again.

Posted by Kathy Crowley-Gardner at 7:30 AM