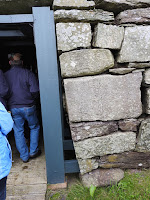 Soon the buses stopped again and we trekked up muddy paths and roads to Capeen Fort, another early seat of the Crowley Clan. Michael Patrick explained that, once again, there was a moat surrounding the fort, another mound and then the entrance. The entrance we all walked through was a hole in a mound surrounded by architecturally placed stones with a metal lintel. As we walked through the small tunnel, we saw newly reinforced stone walls and ceiling. The tunnel opened to the light of another basin that once was the yard of the fort. 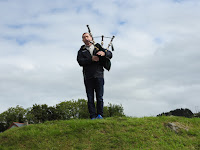 We walked around snapping pictures. Someone called, "Where are all the William Crowleys?" Four showed up, including my brother, and we took pictures of all the Williams. Everyone laughed. There was another herd of curious cows on the far side and many shots were taken of them as well. Then the ceremony began for the "instatement of the Clan Septs Chieftains". A bagpiper, hired for the event, stood atop the mound close by and played. My heart wrenched, as it usually does when I hear the piper play anywhere. Is this feeling a reminder of another life perhaps? Matthew (or Michael, I forget now) Dawson piped during two wars. He now has a mission to pipe around the word for peace.

After I wiped a tear from my eye from the beauty of the tune just played, Michael Patrick began to speak. He wore a battle tartan over one shoulder, and carried his white stick of power with the head of a boar atop it. The bore is the Crowley mascot, for want of a title. He said that as Taoiseach, his goal was to bring the modern-day Clan, born in 1970, back as close to historical accuracy as possible. One way to do this, was to instate the original heirarchy of multiple Chieftains. Historically, there were four. This day, they instated three: the og (meaning young), the red and the tormenter. Our friend, Liam, became the Og. This instatement came as a complete surprise to all who received their titles and respective flags. Liam had a tear in his eye as he stood solemnly but smiling with the other new Chieftains and the Taoiseach while we all took pictures.


After this lovely and touching ceremony, we went to Cappeen pub for lunch. Each lunch we received was a variety of sandwich quarters of stuffing with turkey chunks or chicken or something else delicious, all prepared and cut and served on lovely platters by kind women who all wore a smile. Cups and saucers were arranged on tables and counters as we flowed into buildings not meant to hold so many people and found a seat or stood to eat and drink tea. Some also ordered beer as they bellied up to the bar and ate. A woman came around with a large, hot tea kettle and filled our cups as much as desired. There were lovely scones with butter and jam already spread on them to nibble on as well. What a fantastic treat!


After eating, Jeanne, Cindy and I joined Billy outside while he chatted with Michael Patrick, our new cousin. We met his lovely wife and young son, Liam. What a special day it was! Next we were on our way to Crowley Castle.

Posted by Kathy Crowley-Gardner at 6:19 AM